Silent rubbers BGM PRO made of polyurethane. Significantly tighter than the original rubbers, they reduce self-motion to a minimum.
The damping therefore works more defined and precise.
The vehicle appears much tighter, the dampers respond faster.

The set contains the two rubbers for the front axle shock absorber.
The rubbers sit on the shock absorber and are mounted both above and below the screwed-on metal retaining plate of the front fork.
They replace the standard silent rubbers 1:1 without further modifications.

MOUNTING
The larger rubber is first pushed onto the upper end of the shock absorber. The smaller rubber sits on top in/on the mounting plate.
The large washer is then placed on top of the holding plate and fixed with a toothed lock washer and nut.
Tightening torque of the upper nut 30-40 Nm.

Simply exchange the rubber against the original ones, ready.

NOTE: The BGM PRO rubbers are much tighter than the original ones but softer than the ones from Clauss Studio 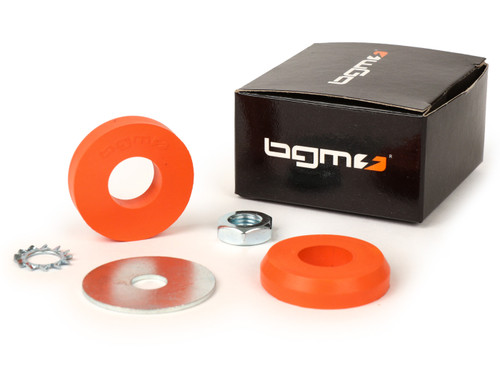